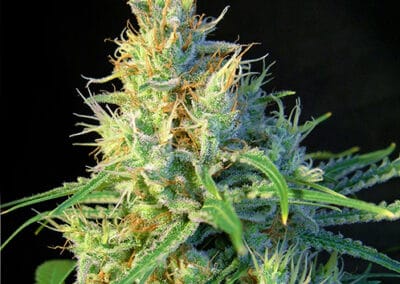 Psicodelicia is a 70% sativa strain that results from a cross between a clone from the United States and a Nepalese strain which has a spicy aroma of roasting coffee beans. It has a stimulating sativa high yet produces good yields in a short flowering period.

Psicodelicia can be grown in all environments and due to its short flowering time of 8 – 9 weeks. This makes cultivation possible outdoors in somewhat more temperate climates as the anticipated harvest date in northern latitudes is late September to early October. It will still be a bit of a gamble regarding countries such as The Netherlands although latitudes such as central France should be fine. Indoors yields are expected to be between 400 – 600 gr/m2 while plants cultivated outdoors should come in at somewhere between 450 – 700 gr. each.

The aroma is sweetly intense with citrus and spiced coffee notes from the Nepalese side. The perfume never becomes too heavy, remaining quite a delicate scent. It produces high levels of THC, between 15 – 20%, with low amounts of CBD giving an effect that is typically sativa with a mentally stimulating, energetic high that is quite creative. This effect plus the good yields in a shortened flowering time make this a great strain for the ‘cannasseur’.