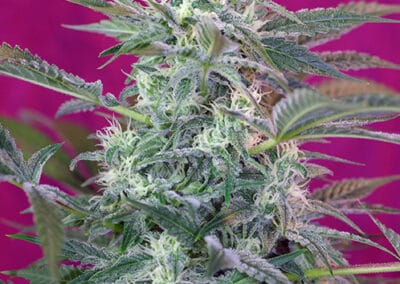 Big Foot can be grown indoors as well as outdoors. Indoor plants will produce very good yields of between 500 – 650 gr/m2 in a flowering period of 7 – 9 weeks. Outdoors Sweet Seeds do not provide any specific figures but simply state “Maximum”! In other words each plant grown outdoors will be able to produce extremely high yields which are more likely to be in excess of the maximum indoor yield per m2. Clearly local conditions will be a limiting factor but training will enhance yields even more. Its buds are very dense and produce high amounts of resin. Harvest time in the northern hemisphere will be late September. The early finish helps to mitigate the threat of mould attacking the buds and ruining the crop.

The aroma of Big Foot is incredibly pervasive being sweet and fruity with marked spicy notes. THC production is quoted as being in the medium range which will be around or just under 15%. The effect is both euphoric and relaxing at the same time.