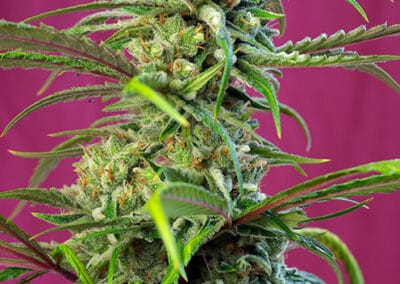 Sweet Tai is a hybrid cannabis strain that was bred by crossing Sweet Seeds’ own Super Tai plant with an Early Skunk. The latter shortens the flowering time and also adds considerable density to the buds of Sweet Tai.

Sweet Tai has a comparatively compact structure for a plant that is 70% sativa. This, along with the other properties passed on from the Early Skunk, makes it a great indoor strain whereas pure Thai plants are very difficult to control indoors and require a much longer flowering period. Indoor yields are between 350 – 450 gr/m2 in 9 weeks of flowering. It can also be cultivated in an outdoor situation yielding 300 – 500 gr/plant with northern hemisphere harvests taking place either in late September or early October.

Sweet Tai retains aspects of the Thai marijuana effect being very cerebral whilst also being good for various activities too. The Early Skunk has grounded it a bit making it calmer and less psychedelic than pure land-race Thai strains which can get a bit much for some people’s taste.