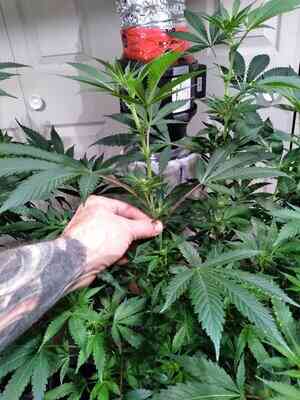 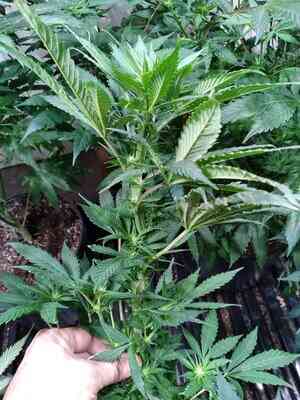 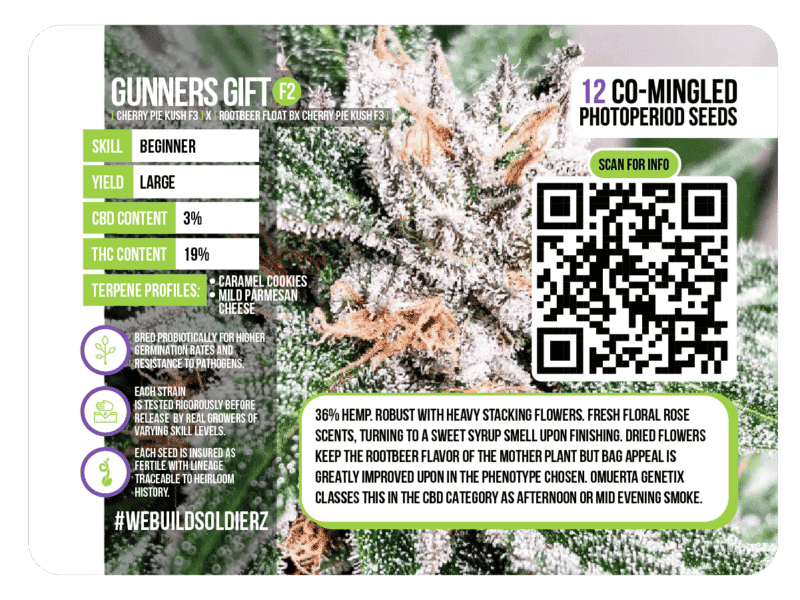 Gunners Gift has been a project close to my heart and in developement for about 3 years in total before finally releasing as a stable and true production backcross. We took the famed ‘Highschool Sweetheart’, a cross of Cherry Pie & Gratefulbreath, to a third generation inbred cultivar following our strict probiotic and eugenic principle’s and crossed it to a CBD variety.

Root Beer Float is a cultivar with a very high Hemp DNA lineage of 46%. Though I was impressed with the yields on the strain, when dried and cured the product did have a strong root beer flavor and smell but lacked bag appeal keeping its more hemp look and size. At the time I was playing with a lot of smaller yielding OG’s and hybrid’s and the yield was impressive on the RBF so finding a way to incorporate it was something I wanted to attempt.

Crossing it with the HSSHF3 pollen while working on the F4 version, We sent it out as a free tester under the working name ‘Angel Duster’ to all our client’s in the summer of 2019 as well as grew out the tester’s in-house. This go around the product was substantially better with better flavor, scent and bag appeal. The Angel Duster keeps some charcteristics of the RBF as the Hemp percentage is still 23%. This bulked up the yields while the stable inbred HSSHF3 side brought in the taste and looks of a higher tier product. When testing came back for the Angel Duster it was shocking at a whopping 6% CBD.

To further this experiment in epistasis, Omuerta took a large sift of the Angel duster Master seeds and hunted down the plants most resembling the HSSH strain on the female side. We then hit them with the exact batch of HSSHF3 pollen from deepfreeze. This is a true backcross right down to the sire parent plant.

Now we could have stopped there with a true backcross and have the work shown itself but that just isn’t Omuerta’s style. Back into the garden to tinker, we again followed the same protocol as the Angel Duster and raised a large spread of seeds looking for something special. Three separate possible keeper pheno’s were found and all pollinated by the same male to give a wide array of phenotypical spread in the offspring.

36% Hemp. Robust with heavy stacking flowers. Fresh floral rose scents, turning to a sweet syrup smell upon finishing. Dried flowers keep the root beer flavor of the mother plant but bag appeal is greatly improved upon in the phenotype chosen. Omuerta Genetix classes this in the CBD category as afternoon or mid evening smoke.

Plants are absolute monsters! Training and topping is recommended to keep them at a reasonable control. Keeping the bag appeal and an almost root beer taste of the Cherry Pie Kush plant. Flowers are large and full with a heavy coating of trichomes making this flower look like a high THC high quality variety. Effects from Gunners Gift are immediately felt in a rush of relaxation. Music sounds clearer and richer, the sun seems brighter and warmer and shining down just for you. A great all day all evening smoke that will leave you relaxed and unstressed and just feeling GOOD.