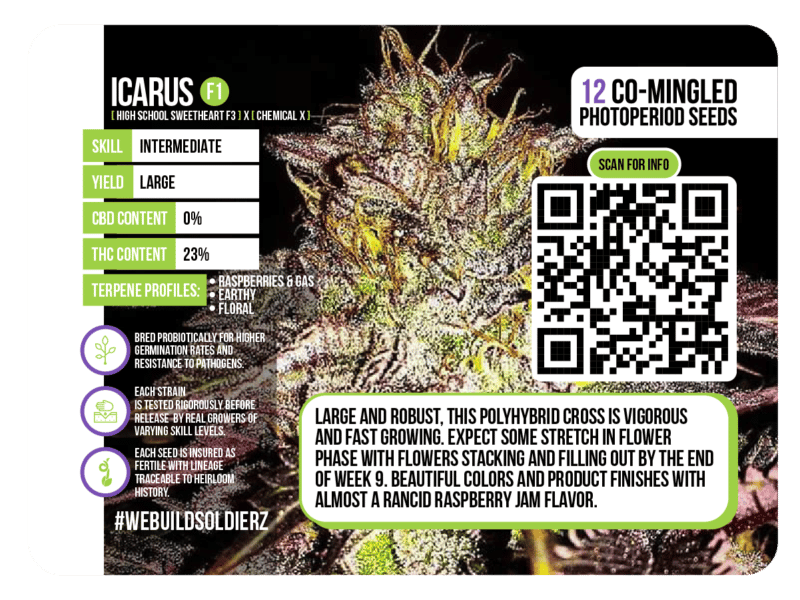 In March of 2o2o The world lost a talented young breeder with a very bright future to a tragic and sudden end. The community was rocked as this man touched alot of people with his kindness, his generosity and above all else, his zest for life and bringing humor to those around him. I spent many nights listening to Jimmy’s dreams and plans for the future and was lucky enough to call him friend. I feel it is my duty as that friend with the ability to help his legacy to do just that. This year we release ‘Icarus’, an F1 polyhybrid of Omuertas own Highschool Sweetheart F3 aka Haydens Strain and Jimmys own creation under his brand Beyond Top Shelf, ‘Chemical X’.

Icarus is our second contribution using genetics donated from Beyond Top Shelf, with 2o19’s Bad Hombres release being our first and true collaboration with another seed company. Our relationship had just gone through the first large test and the field was wide open for future endeavors when Jimmy was taken from the world.

I settled on the name Icarus after the greek mythology story of the boy who flew too close to the Sun. Jimmy was a firecracker.. A true living spark who brought excitment and fun into peoples lives around him. In his quest to escape the mundane and live his dreams, he chose breeding Cannabis as his vehicle and showed a tremendous talent in this field. I often think of the similarities between his story and Icarus. It is to celebrate his life and his talent in the industry that we are proud to release Icarus on to you as an F1.

Large and robust, this polyhybrid cross is vigorous and fast growing. Expect some stretch in flower phase with flowers stacking and filling out by the end of week 9. Beautiful colors and product finishes with almost a rancid raspberry jam flavor.