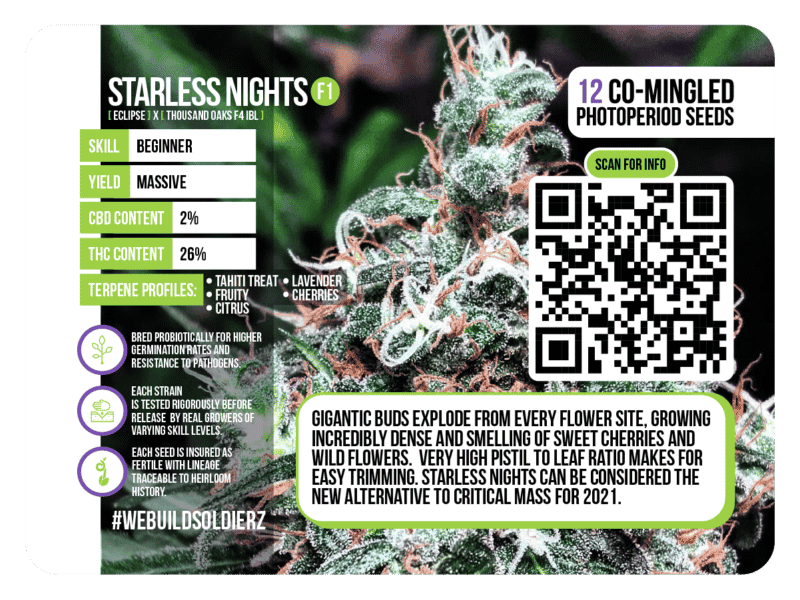 Revisting our root’s and combining two of the all time Omuerta Genetix favorite’s. When Omuerta was first conceived I released four original strain’s to test the water’s after a couple of year’s giving away free seed’s to anyone who would grow them and send me picture’s. Eclipse was one of those release’s, a cross between Chocolope Kush and Grape Stomper. It is high in CBG and CBN making it a great strain for chronic nerve pain, anxiety and sleep disorders as well as appetite stimulation and restless leg syndrome, to name just a few conditions that these compounds can help ease. The yield on Eclipse was exceptional as well making it a great choice for smaller plant counts or sea of green style gardens. Crossing it with a male Thousand Oaks F4 seemed like a no brainer, and so it was.

Starless Nights reminds me of the old critical mass plants of 20 years ago that just exploded in huge dense flowers on every branch and smelled of oranges. She flowers almost identically but with a strong Tahiti Treat odor. Staking and scrogging are needed for these little monsters. Effects are fast acting and relaxing on the body and mind, clear but heavy.

Gigantic buds explode from every flower site, growing incredibly dense and smelling of sweet cherries and wild flowers. Very high pistil to leaf ratio makes for easy trimming. Starless nights can be considered the new alternative to Critical Mass for 2021.